Standard Name: Stead, Christina
Birth Name: Christina Ellen Stead
Nickname: Peg
Married Name: Christina Ellen Blake
Over a period of fifty years in the twentieth century, Australian-born CS published a short-story volume (many more stories were posthumously collected), eleven novels (one also posthumous), three translations, and a volume of novellas. Her literary career, never at any stage without obstacles, fell into several sections. At first she drew positive responses from publishers and some reviewers, though her works were seen as uninviting and difficult, and never sold well. The Man Who Loved Children seemed to signal a breakthrough into fame, but after this Stead's prickly personality, refusal to compromise, and Communist politics consigned her to outer darkness again. For years she worked at revision (a task she hated) of texts which had been rejected in their first form, only to have them rejected again. Belated recognition involved acknowledgement that the literary world had been exceptionally slow to do her justice.
Full profile 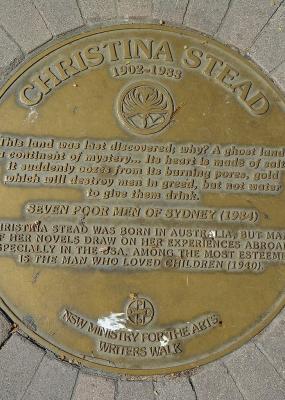 "Christina Stead, plaque in Writers Walk" Retrieved from https://tinyurl.com/y5e75p98. This work is licensed under the Creative Commons CC0 1.0 Universal (CC0 1.0) Public Domain Dedication license. This work is in the public domain.