Standard Name: Streatfeild, Noel
Birth Name: Mary Noel Streatfeild
Pseudonym: Noelle Sonning
Pseudonym: Susan Scarlett
Pseudonym: Vicky Strangeways
NS published over five decades of the twentieth century, from the 1930s. Arguably all but seventeen of her sixty-four books were aimed at children. (Some books are classified both ways.) Her adult novels are notable for their depiction of women coping with definingly modern issues of earning a living and weathering society's changing attitudes to sex, divorce, and instability, and of alternatives both to the bourgeois or gentry family (the stage, the circus) and to the dominant society. Her first novel for children, Ballet Shoes, made her famous overnight by its appeal to young girls who were mad about dancing. In her later fiction for children NS continued to present very young professional artists developing their skills; this favourite subject-matter is linked with an unusual capacity to take children seriously. NS also wrote plays from early in her career, and later wrote radio and television scripts from her own work, in addition to non-fiction books, anthologies, biography, and heavily fictionalised autobiography, as well as a series of pot-boiling romance novels which she did not wish to have considered as part of her oeuvre.
Full profile 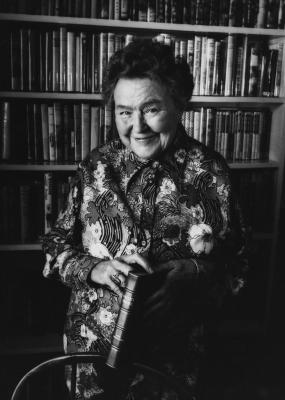 "Noel Streatfeild" by Don Smith, 1972-11-01. Retrieved from https://www.gettyimages.co.uk/detail/news-photo/portrait-of-author-noel-streatfeild-in-front-of-a-bookcase-news-photo/1064239954. This image is licensed under the GETTY IMAGES CONTENT LICENCE AGREEMENT.

1934
Patricia Lynch published The Turf-Cutter's Donkey: one of a new wave of characterful books for children which also included P. L. Travers , Enid Bagnold , Noel Streatfeild , and Eve Garnett .
29 March 1972
A major exhibition of ancient Egyptian treasures associated with the boy pharaoh Tutankhamun opened at the British Museum , to mark the fiftieth anniversary of the opening of the treasures on 16 February 1923.
By 20 June 2000
Jane Nissen , a former editor at Penguin , published the first four titles by Jane Nissen Books , reprints of much-loved children's books of the twentieth century.
9 December 2006-17 July 2007
The National Portrait Gallery in London mounted an exhibition of photographs of women writers, mostly novelists, from 1920 to 1960.