Standard Name: Glyn, Elinor
Birth Name: Elinor Sutherland
Nickname: Nellie Sutherland
Married Name: Elinor Glyn
Indexed Name: Mrs Glyn
Self-constructed Name: Madame Glyn
EG , a highly prolific and popular twentieth-century romance novelist, also wrote comedies of manners, and screenplays (mostly for silent films). The sexual candour of her novels shocked her Edwardian public: she became particularly known for her term It—meaning personal sexual magnetism—and for her novella and silent film of that title. Over the course of her career, she wrote more than forty novels, adapted eight of them for film (all but two silent), as well as three volumes of short stories, three successive volumes on her thoughts and theories about love, and one on her writing process. During World War One, she wrote French propaganda for US journals, and throughout her career she wrote articles on love, fashion, beauty, and etiquette for magazines such as Cosmopolitan. She kept a journal throughout her life, but never published it. Her novels depict female sensuality and, often, illicit love affairs between older, dominant women and younger, impressionable men. Most of her central figures either come from the upper class, or climb the social ladder by marriage or good luck. EG 's writing is drenched in her romantic notion of love, which she saw as overwhelming, uncontrollable, passionate, sensual, selfless, idealistic, and chivalrous. In her fiction lovers often triumph over impossible situations before consummating their love. Her represention of female sensuality is compatible with advising women: Be elusive—always.
Glyn, Anthony. Elinor Glyn. Hutchinson, 1968.
76
Etherington-Smith, Meredith, and Jeremy Pilcher. The "It" Girls. Harcourt Brace Jovanovich, 1986.
240
Full profile 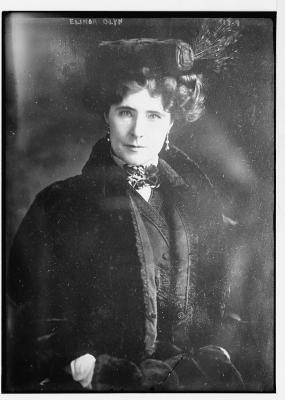 "Elinor Glyn" Retrieved from https://upload.wikimedia.org/wikipedia/commons/thumb/7/70/Elinor_Glyn%2C_portrait_bust_LCCN2014680673.jpg/745px-Elinor_Glyn%2C_portrait_bust_LCCN2014680673.jpg. This work is licensed under the Creative Commons CC0 1.0 Universal (CC0 1.0) Public Domain Dedication license. This work is in the public domain.

1915
Elinor Glyn lost her suit for infringement of copyright against the producer of a film parodying her 1907 bestseller Three Weeks.