Standard Name: Dixon, Ella Hepworth
Birth Name: Ella Nora Hepworth Dixon
Pseudonym: Margaret Wynman
As a suffragist writing at the turn of the century, EHD often deals with the question of female independence, while critiquing fin de siècle society. Along with her extraordinary New Woman novel, she produced a volume of short stories, a collection of comic pieces (published under a pseudonym), and numerous articles (some of which were travel articles) and stories for various journals. Indeed, everything she ever published . . . appeared first in the periodical press.
Fehlbaum, Valerie. Ella Hepworth Dixon: the Story of a Modern Woman. Ashgate, 2005.
66-7
Near the end of her life she published an autobiography.
Full profile 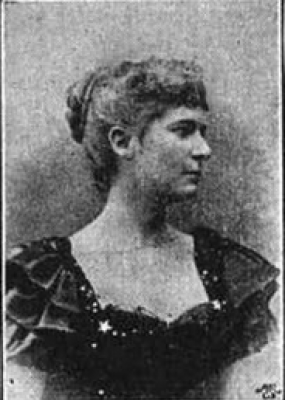 "Ella Hepworth Dixon" Retrieved from https://upload.wikimedia.org/wikipedia/commons/c/cd/Ella_Hepworth_Dixon.png. This work is licensed under the Creative Commons CC0 1.0 Universal (CC0 1.0) Public Domain Dedication license. This work is in the public domain.