CR wrote and published poetry ranging from religious poetry, love lyrics, and sonnets to narrative and dramatic verse. She published five successive volumes of verse, three collected editions, and many individual poems in anthologies and periodicals, from the 1840s until her death in the 1890s. She occupies a liminal position in relation to the Pre-Raphaelite movement: deeply influenced by and indebted to it, she developed a voice and preoccupations in many respects distinct from those of its male members, partly because of her equally strong absorption in the High AnglicanOxford Movement. Goblin Market, the poem for which she is best known, has frequently been re-issued as a children's fable, but has also been convincingly read as a complex exploration of religion, gender, and sexuality. Some of her other verse was specifically aimed at children. Her attempts at prose fiction, of which a volume appeared in her lifetime and another posthumously, were not as well received as her poetry. CR 's devotional writing, which intensified towards the end of her life, includes hymns and other religious verse, as well as six volumes of religious commentary presented from a distinctively female standpoint. A writer who combined abiding interest in symbol and correspondence with stylistic austerity and metrical innovation that presaged modernism, CR is recognised as one of the major poets of the Victorian period. 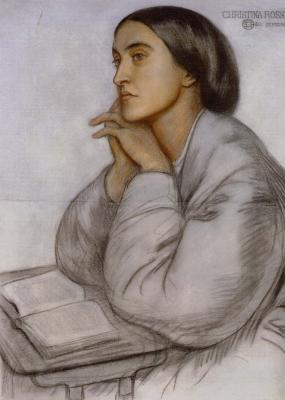 "Christina Rossetti" Retrieved from https://commons.wikimedia.org/wiki/File:Christina_Rossetti_2.jpg. This work is licensed under the Creative Commons CC0 1.0 Universal (CC0 1.0) Public Domain Dedication license. This work is in the public domain.

She signed herself in the full form of Christina G. Rossetti throughout her life in correspondence to family members and friends as well as strangers. In signed publications she was credited thus or simply as Christina Rossetti. Sister Christina was her name, though she had not taken vows, in her voluntary job at the St Mary Magdalene Penitentiary .
Marsh, Jan. Christina Rossetti: A Writer’s Life. Viking, 1995.
137