Standard Name: Brazil, Angela
Birth Name: Angela Brazil
AB began writing children's plays about fairies, and progressed, during the first half of the twentieth century, through one bildungsroman for girls based on her own childhood and another on the experience of her mother, to a series of almost fifty book-length school stories for girls, besides stories and essays for magazines, and an autobiography. The predictability of formula fiction creeps gradually into her writing. Heroines indulge in mad escapades
Freeman, Gillian. The Schoolgirl Ethic: The Life and Work of Angela Brazil. Allen Lane, 1976.
133
but entertain intense loyalty to friends, school, and country; they triumph in the end after wrestling with difficulty and sometimes persecution; they enter into hero-worshipping emotional involvement with each other or with teachers. Brazil's naive, enthusiastic, cliché-ridden style, studded with schoolgirl slang, carries readers along with compelling narrative energy.
Full profile 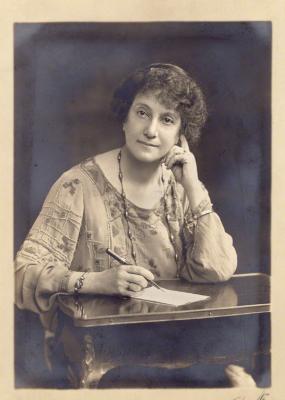 "Angela Brazil" Retrieved from https://upload.wikimedia.org/wikipedia/en/7/7d/Angela_Brazil%2C_early_1920s.jpg. This work is licensed under the Creative Commons CC0 1.0 Universal (CC0 1.0) Public Domain Dedication license. This work is in the public domain.

By December 1916
Bessie Marchant , who had been publishing adventure storiesfor girls and for boys since around 1892, issued one of several books using First World War experience: A Girl Munition Worker,