Standard Name: Marson, Una
Birth Name: Una Marson
Married Name: Una Staples
UM was a pioneering Jamaican poet, dramatist, journalist, and broadcaster whose most prolific period was the 1930s, during which she divided her time between Kingston, Jamaica, and London, England. Her writing consistently reflects her commitment to local and global feminism. Her interest in racial and national politics became increasingly apparent in her life and her writings, most notably in The Moth and the Star (1937), a poetry collection infused with blues sounds exploring the complexities of black female identity, and in Pocomania (1938), a play about the controversial African-based religious cult of that name in Jamaica.
Full profile 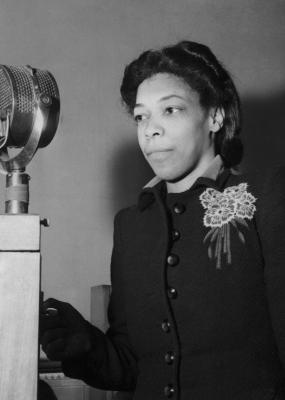 "Una Marson" by Fred Ramage, 1942-02-23. Retrieved from https://www.gettyimages.co.uk/detail/news-photo/girlfriend-of-the-forces-una-marson-broadcasting-to-british-news-photo/73388542. This image is licensed under the GETTY IMAGES CONTENT LICENCE AGREEMENT.