Standard Name: Morton, Sarah Wentworth
Birth Name: Sarah Wentworth Apthorp
Married Name: Sarah Wentworth Morton
Pseudonym: Constantia
Pseudonym: Philenia
Pseudonym: Cambria
SWM , poet of the American Revolution, is remembered for the long, sentimental, narrative poems in which she considers the make-up of the new nation, inter-racial relationships (equal male friendship, unequal heterosexual love), the relationship of history to topography, and heroism both male and female. Her more personal and occasional poems, and her essays, are also of interest. Though too invested in the idea of submission to be a feminist, she has the status and role of women much at heart.
Full profile 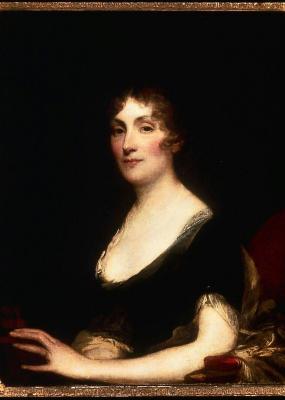 "Sarah Wentworth Morton" Retrieved from https://upload.wikimedia.org/wikipedia/commons/6/6c/SarahWentworthApthorp_ca1802_byGilbertStuart_MFABoston.jpeg. This work is licensed under the Creative Commons CC0 1.0 Universal (CC0 1.0) Public Domain Dedication license. This work is in the public domain.

April 1782
Hester Thrale recorded in her journal a poem by Anne Hunter which seems to be the first English rendering of a Native American death song.
1800
Sally Sayward Keating (later Wood) published at Portsmouth, New Hampshire, her novelJulia and the Illuminated Baron, written some years earlier and incorporating a tribute to Sarah Wentworth Morton .