Gertrude Stein concerned herself with problems of identity, knowledge, consciousness, and language. In a period of modernist experiment, she became famous as a radically innovative avant-gardist. Her experimental imagination played around with the generic requirements of many forms—short stories, detective stories, novellas, literary portraits, poems, autobiographies, critical essays, operas, plays, and war reminiscences. This often non-referential work is opaque and resistant to interpretation. An expatriate for virtually all of her writing career and of the first half of the twentieth century, living largely in Paris (though in French villages during the Second World War), she marked her writing as deeply American. In the years between the wars she hosted her legendary salon at 27 rue de Fleurus, where, after 1910, she lived with her life partner, Alice B. Toklas . With her brother Leo , Stein was an early collector and promoter of modern, especially cubist, painting. 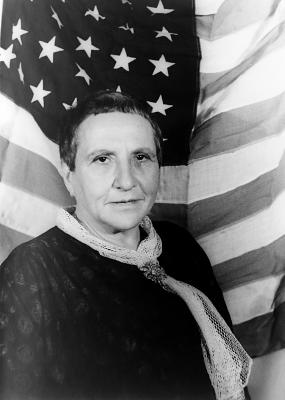 "Gertrude Stein" Retrieved from https://commons.wikimedia.org/wiki/File:Gertrude_Stein_1935-01-04.jpg. This work is licensed under the Creative Commons CC0 1.0 Universal (CC0 1.0) Public Domain Dedication license. This work is in the public domain.