Publishing over forty years of the nineteenth century, professional woman of letters CN produced poetry and songs, four novels, stories, and a few unsuccessful plays. She edited annuals and periodicals, where she also published work of her own, including reviews. The circumstances of her life led her also to publish on the social-reform topics of child labour, divorce law, and married women's property, in pamphlets, letters to the Times, and well-researched monographs. Though she thought of herself as primarily a poet, her polemical writing is now her best-known, just as her contribution to reforming the laws for women in Victorian England has now overshadowed the scandal that dogged her in and beyond her lifetime. 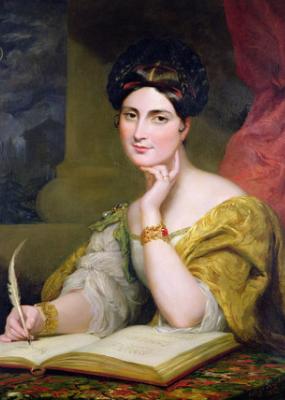 "Caroline Norton, portrait" Retrieved from https://upload.wikimedia.org/wikipedia/commons/c/cc/Caroline_Norton_%281808-77%29_society_beauty_and_author_by_GH%2C_Chatsworth_Coll..jpg. This work is licensed under the Creative Commons CC0 1.0 Universal (CC0 1.0) Public Domain Dedication license. This work is in the public domain.

22 March 1808
Caroline Sheridan (later CN ) was born in London; she was the middle one of three girls in a family of seven children.
Chedzoy, Alan. A Scandalous Woman: The Story of Caroline Norton. Allison and Busby, 1995.
24
Huddleston, Joan, and Caroline Norton. “Introduction”. Caroline Norton’s Defense, Academy Chicago, 1982, p. I - XIII.
iii