SH began publishing very young, and has been extraordinarily prolific throughout the second half of the twentieth century and into the twenty-first. She started off as a novelist and short-story writer, and then branched out into other genres, particularly children's writing, but also radio plays, scholarly and editorial work, cooking and gardening books, and travel writing. In fiction, she has made her own a territory of mutely suffering protagonists too eccentric, powerless, or impaired (emotionally, intellectually or physically) to engineer their escape from emotional pain and despair. (Attempts at escape generally fail.) Many of her characters (including children and old people) are isolated; relationships are often based on tormenting or exaggerated dependence. Her social settings are often unparticularised by date, but are apparently a kind of old-fashioned present; other fictions inhabit the past. She works with both the bleakly realistic and quotidian, and with atmospheres of gothic uncanniness, but her typical narrating voice remains steadfastly detached. 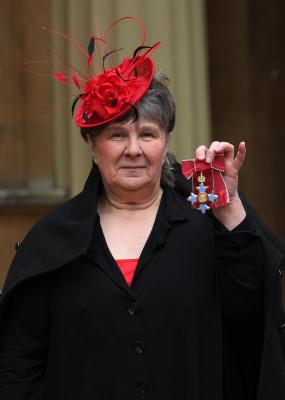 "Susan Hill" by Sean Dempsey, 2012-12-13. Retrieved from https://www.gettyimages.co.uk/detail/news-photo/author-susan-hill-holds-her-commander-of-the-british-empire-news-photo/158325467. This image is licensed under the GETTY IMAGES CONTENT LICENCE AGREEMENT.

5 February 1942
SH was born at Scarborough in Yorkshire, after thirty-six hours of labour; she remained an only child.
“Dictionary of Literary Biography online”. Gale Databases: Literature Resource Center-LRC.
139
Hill, Susan. Family. Michael Joseph, 1989.
16, 19
By September 1983
SH published The Woman in Black, a novel or novella or ghost story with atmospheric illustrations by John Lawrence , which five years later went on to enjoy immense success as an adaptation for the stage.
Its publication is dated by the Bodleian Library 's acquisition stamp.
Solo: Search Oxford University Libraries Online.