HD, born American, who took British nationality after a marriage which lasted longer on paper than in practice, was a key figure in the international Imagist movement of the early twentieth century and in modernism more broadly: both through her own poetry and through her editing and dissemination of the work of others. As well as her imagistic pieces, she wrote complex longer poems (most published during her lifetime), translation, essays, reviews, outlines for films, and autobiographical novels which are, like most of her work, explorations of the self. Here she writes à clef of her own past, but also builds a web of mythical and psycho-analytical reference which makes her texts dense as well as rewarding. She is an explorer of the female psyche, and of the relation of gender to creativity and of myth to psychoanalysis. 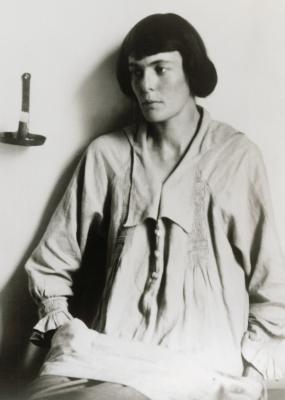 "H. D." by Bettmann/Contributor, 1900-01-02. Retrieved from https://www.gettyimages.co.uk/detail/news-photo/hilda-doolittle-was-a-literary-poet-and-exponent-of-imagism-news-photo/515359940. This image is licensed under the GETTY IMAGES CONTENT LICENCE AGREEMENT.

Works of reference find it hard to deal with the form of her name that this writer chose: H. D. She is frequently indexed as Doolittle.