Standard Name: Gibbons, Stella
Birth Name: Stella Dorothea Gibbons
SG was a gifted comic writer whose lively, parodic first novel, Cold Comfort Farm, was such a success that it has tended to eclipse her later achievements. Much of her writing was inspired by the work of other women writers such as Mary Webb , Ouida , and Jane Austen , who served both as influences and as targets of burlesque. SG began her career as a journalist, and in addition to novels, she also wrote poems, short stories, and a book for children.
Full profile 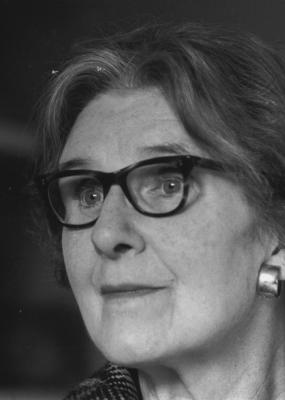 "Stella Gibbons" by Evening Standard/Stringer, 1977-11-28. Retrieved from https://www.gettyimages.co.uk/detail/news-photo/english-writer-stella-gibbons-news-photo/3324180. This image is licensed under the GETTY IMAGES CONTENT LICENCE AGREEMENT.