Standard Name: Harcourt, Mary
Birth Name: Mary Danby
Married Name: Lockhart
Married Name: Harcourt, Mary,,, Countess
MH may never have thought of herself as a writer, though she kept a diary during her time serving at Court (as did several others in her position of a privileged behind-the-scenes angle on people in power). Her Anecdotes of the years 1792-5, when she was, as might be said today, embedded with the British army fighting in the Low Countries, constitute a far more unusual, even a unique text, which makes her arguably the first identified British woman war correspondent, as well as the proponent of a strong case against war as such.
Harcourt, Mary. “Anecdotes Relating to the Years 1792-1795”. The Harcourt Papers, edited by Edward William Harcourt and Edward William Harcourt, 1880, pp. 321 -44.
Full profile 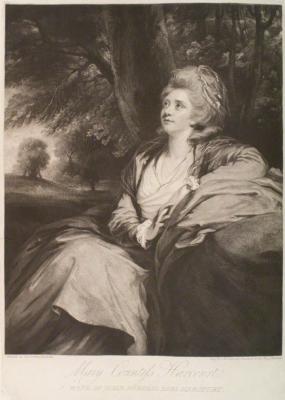 "Mary Harcourt" 2015-01-06. Retrieved from https://commons.wikimedia.org/wiki/File:Reynolds,_after_-_Mary,_Countess_of_Harcourt.jpg. This work is licensed under the Creative Commons CC0 1.0 Universal (CC0 1.0) Public Domain Dedication license. This work is in the public domain.