Standard Name: Ramabai, Pandita
Birth Name: Ramabai Dongre
Married Name: Ramabai Medhavi
Styled: Pandita Ramabai Sarasvati
Religious Name: Mary Rama
PR was a tireless advocate for the importance of education (both secular and religious) for women, and Indian self-reliance. Fifty-five years after her death, A. B. Shah called her the greatest woman produced by modern India and one of the greatest Indians in all history.
Burton, Antoinette. At the Heart of the Empire. University of California Press, 1998.
72
She published in English, Marathi, Hindi and Sanskrit, and her writing was largely tied to her reform work. Her publications include several non-fiction books, pamphlets, and letters on aspects of Indian womanhood, education, and religion in the late nineteenth to early twentieth century, as well as poetry, hymns, music, travel books and a translation of the Bible into Marathi.
Full profile 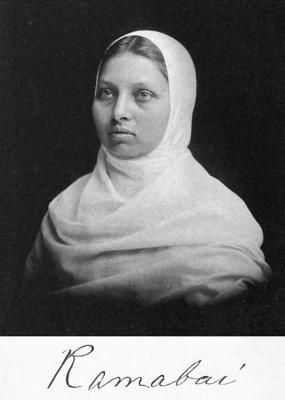 "Pandita Ramabai" Retrieved from https://commons.wikimedia.org/wiki/File:Pandita_Ramabai_Sarasvati_1858-1922_front-page-portrait.jpg. This work is licensed under the Creative Commons CC0 1.0 Universal (CC0 1.0) Public Domain Dedication license. This work is in the public domain.

19 March 1891
The Age of Consent to Marriage Bill was passed by the Indian; it raised the age of consent for girls from ten to twelve.