The busy writing career of Irish nationalist poet, novelist, and journalist KT spanned the late nineteenth and early twentieth centuries, driven partly by the need to support her family. Her more than 160 volumes include about a hundred novels (written primarily for women, many of them romance and some gothic), twenty-seven volumes of poetry (some of it inspired by Irish heritage, nationalism, and Catholicism), twenty-three collections of short stories, six volumes of autobiography, three volumes of sketches, a religious play, a book of axioms, and three volumes of biography or memoirs of other people.
Matthew, Henry Colin Gray, Brian Harrison, and Lawrence Goldman, editors. Oxford Dictionary of National Biography.
Napier, Taura S., and Louise S. Napier. Seeking a Country: Literary Autobiographies of Twentieth-Century Irishwomen. University Press of America, 2001.
53
She selected and edited three poetry collections and a massive volume of Irish literature, all of them important in the Irish Literary Revival, which she helped to produce. Her non-fiction covers Irish history, work for children (including a religious text and a book on behaviour), and a collaboratively written book on flowers. As a journalist she turned out articles and sketches on social, political, and gender issues. She kept an unpublished diary, and a journal of the Great War. 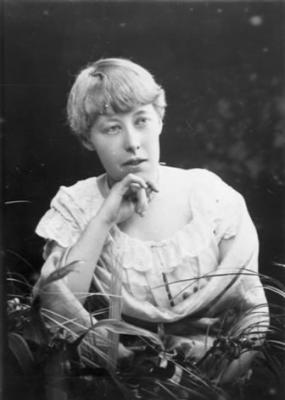 "Katharine Tynan" Retrieved from https://commons.wikimedia.org/wiki/File:Tynan1.jpg. This work is licensed under the Creative Commons CC0 1.0 Universal (CC0 1.0) Public Domain Dedication license. This work is in the public domain.