EBO , a best-selling novelist of the early twentieth century, is best-known for The Scarlet Pimpernel, her romance of aristocrats during the French Revolution. This was a play before it was a novel, and according to its author provoked a polarised response, with ecstatic audiences and fiercely disapproving critics. Apart from almost a dozen Scarlet Pimpernel sequels, she published many other historical romances, a few thrillers with modern settings, one historial biography, and her memoirs. Her short stories include a pioneering volume about a woman detective, who, as an amateur relying on her intelligence, intuition, and feminine guile, regularly out-performs her male professional associates. 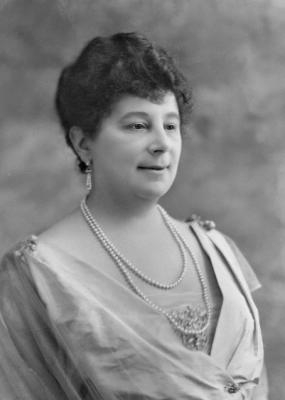 "Baroness Emmuska Orczy" Retrieved from https://upload.wikimedia.org/wikipedia/commons/8/87/Baroness_Emma_Orczy_by_Bassano.jpg. This work is licensed under the Creative Commons CC0 1.0 Universal (CC0 1.0) Public Domain Dedication license. This work is in the public domain.

Christened Emma, which she calls a very ugly name, she was called Emmuska, meaning little Emma in Hungarian.
Emmuska, Baroness Orczy,. Links in the Chain of Life. Hutchinson, 1947.
23
As an adult this was the name she chose and preferred. Although she is nearly always referred to by her title, she did sign preliminary materials as Emmuska Orczy. It is not clear whether she ever used her husband's surname.