SJ was a prolific novelist with an intense commitment to political causes, especially pacifism, anti-fascism, artistic freedom, and various women's issues. Her fiction is generally thought of as realist or materialist in its techniques, and often draws liberally on fact (from her own life, historical events, and characteristics of actual people), though she experimented with its shape and matter more often than has been recognised. She also wrote political and polemical non-fiction, journalism, essays, literary criticism, and autobiography. 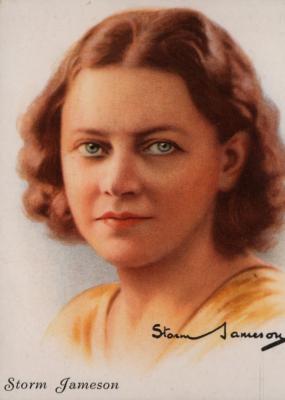 "Storm Jameson " by Universal Images Group/Contributor, 1920-01-01. Retrieved from https://www.gettyimages.co.uk/detail/news-photo/storm-jameson-born-at-whitby-yorkshire-english-novelist-news-photo/113632262. This image is licensed under the GETTY IMAGES CONTENT LICENCE AGREEMENT.