Ménie Muriel Dowie , largely forgotten travel and adventure writer, essayist and new woman novelist, stormed into the literary scene of the 1890s with her enormously popular first book, A Girl in the Karpathians, which describes her solitary journey through easternEurope. By then she was a published poet, essayist, and writer of short stories, and had earned accolades for her speeches. During the last decade of the nineteenth century and the first few years of the twentieth, she wrote across a variety of genres, becoming both a columnist and editor, and continuing to publish short stories, most notably in The Yellow Book, before her abrupt departure from the literary scene in 1903. Her characteristic tone is ironic, satirical, and often playfully ambiguous. 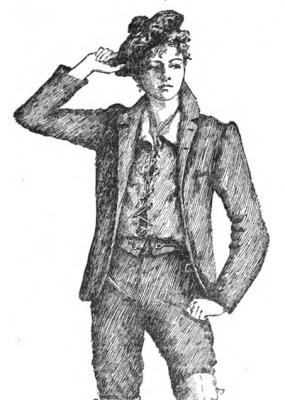 "Ménie Muriel Dowie" Retrieved from https://commons.wikimedia.org/wiki/File:M%C3%A9nie_Muriel_Dowie_0001.jpg. This work is licensed under the Creative Commons CC0 1.0 Universal (CC0 1.0) Public Domain Dedication license. This work is in the public domain.