Standard Name: Marsh, Ngaio
Birth Name: Edith Ngaio Marsh
NM , a New Zealander with strong ties to Britain, is known there and worldwide for her thirty-one detective novels issued between 1934 and 1982 (and occasionally published in the USA ahead of the British edition). Less well known is her career as a theatrical producer and director in New Zealand, and sometimes in Britain, which included writing about theatre and as a playwright. Her non-fiction writings include, as well as those about theatre, travel journalism and comment on New Zealand, and an autobiography.
Full profile 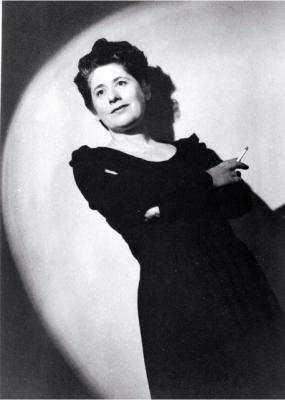 "Ngaio Marsh" Retrieved from https://upload.wikimedia.org/wikipedia/commons/9/9e/Ngaio_Marsh%2C_1940s.jpg. This work is licensed under the Creative Commons CC0 1.0 Universal (CC0 1.0) Public Domain Dedication license. This work is in the public domain.

6 February 1939
Raymond Chandler , aged fifty-one, published The Big Sleep, the first and one of the best-known of his seven Philip Marlowe novels, famous as hard-boiled detectivefiction.